Florida is no stranger to future and sitting U.S. Presidents. They have been coming here since before it was a state. 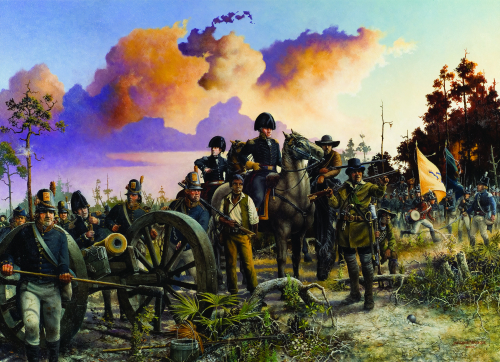 It began with Andrew Jackson (1767-1845) well before he was the seventh president (1829-1837). His tours in Florida helped expand his reputation as a military hero in the War of 1812. In 1817, acting as commander of the army’s southern district, Jackson basically invaded northern Florida, then under Spanish control. After capturing some Spanish ports, he claimed the surrounding land for the United States. Spain protested, to no avail, and despite the following debate, Jackson’s actions helped speed up America’s official acquisition of Florida in 1821. 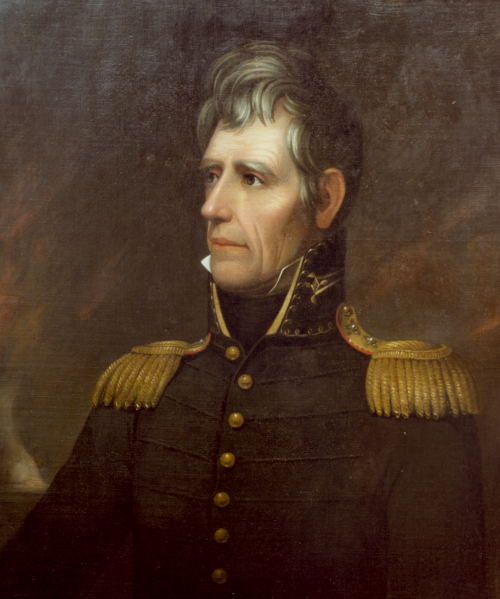 Jackson’s brief stint in Florida became known as the First Seminole War (1817-1818). The next presidential figure, Zachery Taylor (1784-1850) was here for part of the Second Seminole War (1835-1842) which was sparked in part by the Seminole’s refusal to abide by the Indian Removal Act, signed into U.S. law by... wait for it... Andrew Jackson. 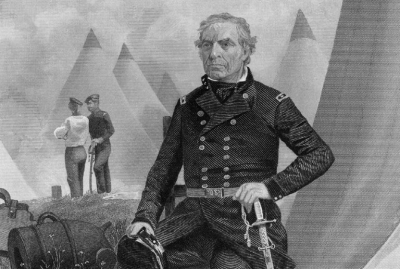 Taylor was a Colonel in December, 1837, when he led about 1,100 U.S. troops on their way to Lake Okeechobee into an ambush that was clearly a tactical victory for the 400 Seminoles since Taylor had to retreat with much higher casualties than the natives.  The Army declared it a strategic victory, promoted Taylor to Brigadier General and later, in May 1838, gave him overall command of Florida operations.

Sporting the nickname “Old Rough and Ready”, Taylor was the 12th president from March, 1849 until his death in July, 1850. 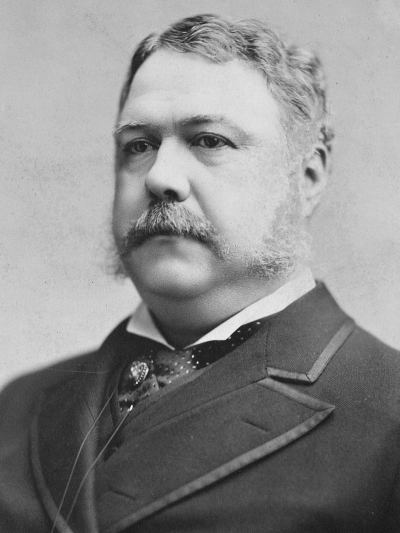 The first sitting president to visit the state was the 21st, Chester A. Arthur (1829-1886), who, in April, 1883 did just what thousands of well-to-do Northerners did during the long cold winter, took himself off to the “Sunshine State.”  The itinerary for the official ‘general’ visit took Arthur and his entourage by ‘fast mail train’ to Jacksonville, where he was greeted by a large crowd and a reported outbreak of smallpox. The group quickly boarded a steamboat for a trip up the St. Johns River to Sanford, where, after an ‘admirable’ dinner, Navy Secretary William E. Chandler reportedly ‘shucked’ his coat and gaily climbed an orange tree to pick some fruit, a rare treat at the time.

The trip continued on through Winter Park and Orlando to Kissimmee City, where the nations “Angler in Chief” found excellent fishing; he pulled five ten pound bass from Reedy Creek (now on Disney property) on his first visit, and another ten pounder ‘on his first cast’ the next day.  He also sun burned his face.

Arthur returned to Washington April 22, looking tanned and healthy. But, he was not well. Many believed he contracted an illness, which lead to his death in November 1886, on the Florida trip. In reality, he already had the beginnings of Bright’s disease (nephritis) which killed him at age 56. 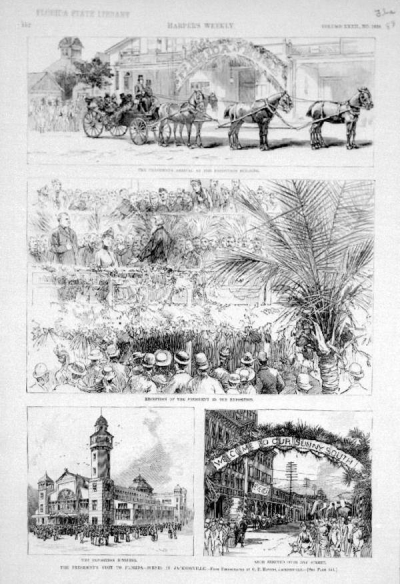 The unfortunate link between the Florida visit and Arthur’s illness did not deter his successor. Grover Cleveland (1837-1908) visited in February, 1888, as commemorated in this delightful drawing in Harper’s Weekly, found in the Florida Memory collection. This official trip included a speech, an exposition in Jacksonville, a steamer trip up the St. Johns to Palatka and then on to Titusville and a yacht trip down the Intracoastal Waterway to Rockledge and then on to the South Florida Expo in Sanford. 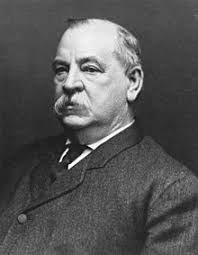 After his terms (1885-1889 and 1893-1897), Cleveland was a frequent vacationer and became an annual ‘snow bird’ from 1900 on, usually staying six to eight weeks at a time each winter. He even purchased some land in Stuart, but never got to build on it before his fatal heart attack in June, 1908.

We return to the military tradition of visiting future presidents with the end of the 19th century. 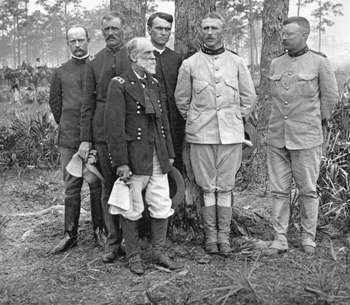 Colonel Theodore “Teddy” Roosevelt (1858-1919) stands a bit to the right of the other high ranking officers of the First U.S. Volunteer Cavalry Regiment in Tampa in 1898 in this photo found in the Florida Memory archive. Known as The Rough Riders, the unit was a diverse group including Native Americans, Ivy League athletes, cowboys, gold prospectors and former Texas Rangers. Under Teddy’s command, they all came to Tampa at the end of May, 1898, and a few weeks later sailed to Cuba and their appointment with history on San Juan Hill.

By the end of 1898 the returning war hero was Governor of New York and was selected to run for Vice President in 1900 with William McKinley. Roosevelt became the 26th President in September, 1901 following McKinley’s assassination.

Perhaps the biggest legacy for Teddy in Florida is the numerous national parks and preserves, such as the Theodore Roosevelt Area at Timucuan Ecological and Historic Preserve near Jacksonville.

This brings us to the 20th century. 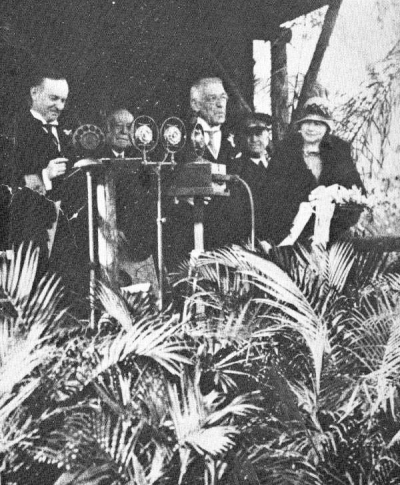 Calvin Coolidge (1872-1933, 30th President, 1923-1929) and his wife, Grace, made their first trip to Florida in February, 1929 for the dedication of the Bok Tower in Lake Wales.  Their visit is noted in this brochure found in the collection of the Library of Florida History. The collection also has some personal photos of another Presidential visit; one by FDR in 1936. 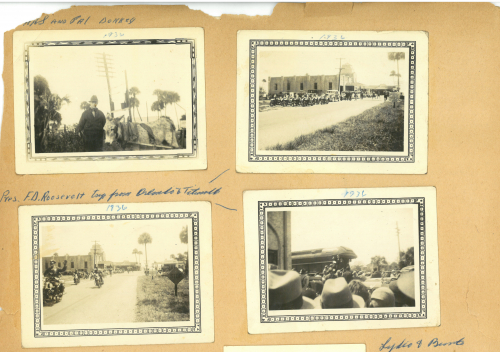 The Sission family of Titusville turned out along with most of the area’s population when Franklin D. Roosevelt (1882-1945. 32nd President 1933-1945) came to town. Two of the photos show the motorcycle escort for the president’s drive to Orlando. One, taken from the middle of the crowd, show FDR on the rear platform of his train. The pictures, documenting how folks were eager to turn out for what most considered a magnanimous figure, made it into the family album, which is now preserved at the Library.

Up to this point the sitting presidents who came to Florida were either visiting or campaigning. 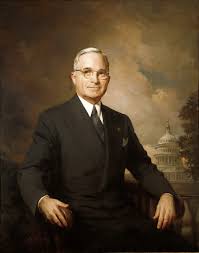 That changed with Roosevelt’s successor, Harry S. Truman (1884-1972, 33rd President 1945-1953). He first vacationed at a little house on the Navy Base in Key West. He liked it, came back often, and conducted official business and visits there (along with some famous poker games) for some of the biggest names of the times. 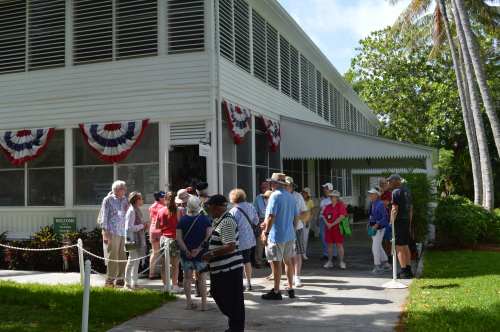 Today, visitors, such as these members of the Florida Historical Society on a 2018 tour, may find it hard to imagine this simple two story home with simple furniture and only ventilation for temperature control as a center for a world power. But, as we like to say, “Only in Florida.” 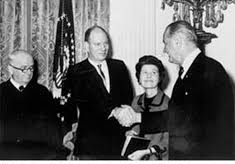 With Florida’s growth and expanding tourism it is not surprising that many presidents have visited. Kennedy, Bush, Sr. and Nixon all had residences in the state.

So far, the closest a Floridian has gotten to the presidency was Alan S. Boyd (b. 1922) who served from 1967 to 1969 as Secretary of Transportation under Lyndon Johnson.

That may change. This is a big state and, of course, has played a key role in selecting presidents.