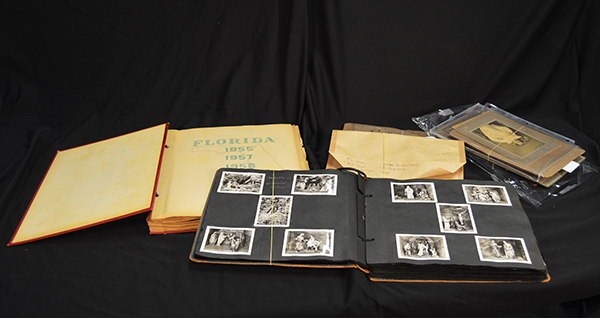 The Florida Historical Society takes in dozens of photo donations every year; post cards, single images, albums, storage boxes, collections, each a frozen moment of someone’s story, a memory that once inspired someone to press a shutter while thinking, “I want to remember that.”

Now those once cherished memories often come down to “Can you guys use these, I hate to just throw them out, but...?”

Now, as archivist Ben DiBiase explains in an episode Florida Frontiers Radio, (https://myfloridahistory.org/frontiers/radio/program/399) the answer is a firm “that depends.” After all, this is the Florida Historical Society and the Library of Florida History, hint, hint. 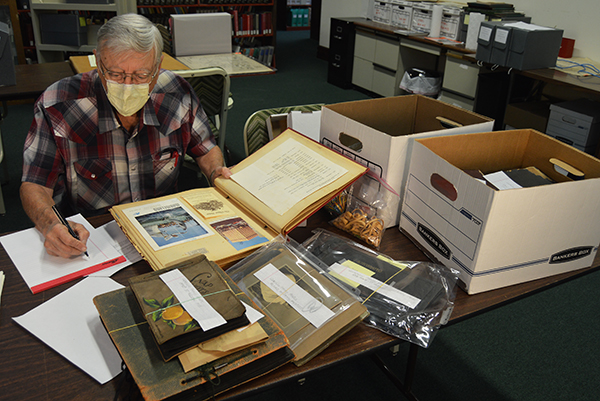 The first question, whether it is one picture or a dozen albums, boils down to ‘what are the pictures of?’ So, the first task for volunteer Dan Bologna, faced with a recent large donation, is to make a list and sort the books by topic, condition and information, and noting the list of contents inside the front cover of the book he is inspecting. That sort of information is invaluable. 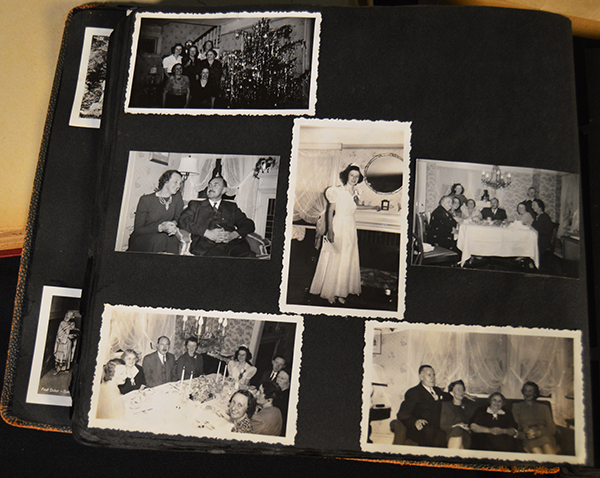 But what is to be done with the unlabeled page? We all (well, photo archivists and those of a certain age) can recognize the early 1950s scalloped edged Kodak prints, not to mention the forest grown, unshaped Christmas tree.  The staircase means it is not likely a Florida home. Without more information, often missing from donations, it would be impossible to identify these photos and make an informed decision on preservation. 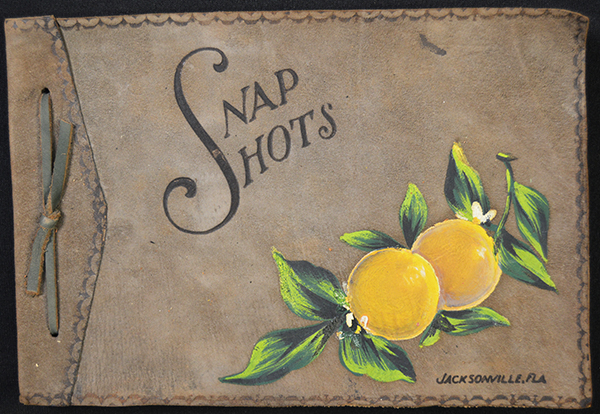 Then there are the albums that make the archivist’s day: the cover says “Pictures of Florida topics.” 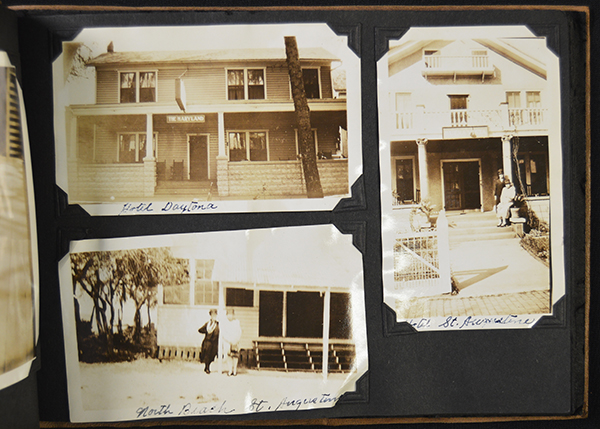 Indeed, this one turns out to be a hand decorated and carefully curated collection of a family’s trip down the east coast of Florida in the 1920s, replete with charming snapshots of long gone tourist stops definitely of interest to any local historian. Put it on the list and shelve it? Not quite yet.

Notice the brown color of the prints, sometimes described as “Sepia”. Well, it is not a good thing. “Sepia toning” is a specific technique used on early prints to warm them up. This brown is deterioration; you can almost think of it as rust.  These snapshots used to look like this: 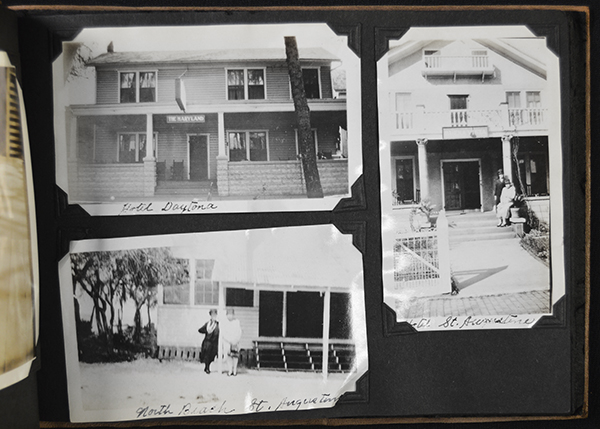 After all, they were called ‘black and white’ photos. But even commercially processed photos such as these were not always properly washed to remove the chemical used to ‘fix’ the picture, removing the light-sensitive silver. Over time the fixer turns brown, especially if the pictures are not kept in an archival environment.  This album is not an archival environment.

Most common albums in the 20th century were made of paper that contains lignin and acids from wood pulp, and most ended up being stored in attics or garages in extreme temperatures and humidity. Let’s just say it is a heated acid bath and not the best place to keep photos (https://www.archives.gov/preservation/family-archives/storing).

Now, a moment to consider the worst of the worst, the infamous ‘Magnetic Albums’ so popular in the 1960’s and ‘70s. They were made of thick paper coated with tacky glue and covered by a plastic sheet. It turns out the glue contains an acid that eats through the back of the photos and in most cases (read ‘cheaper’) the plastic was PVC with additives that also ate away the dyes in the photos. It would have been kinder to put a match to the pictures. 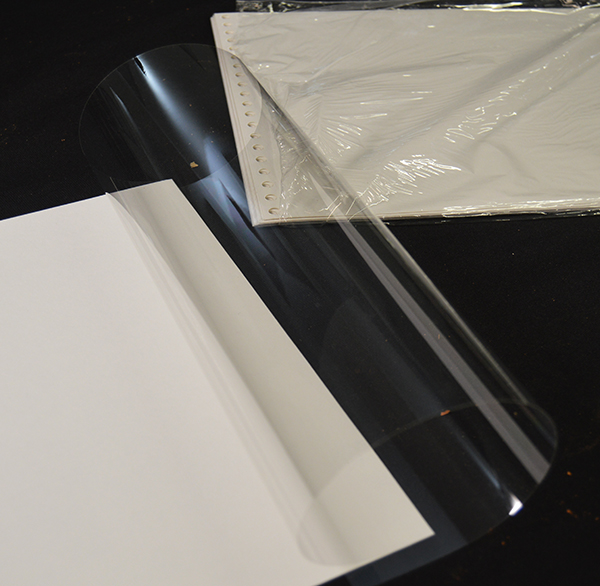 Just for the record, glue-free and acid-free paper pages are now available with clear plastic that holds photos in place. Traditional archive pages, like the ones in the picture, use Mylar plastic, so clear you can hardly see it, and depend on paper corner mounts to hold photos in place, which brings us back to our Florida album. 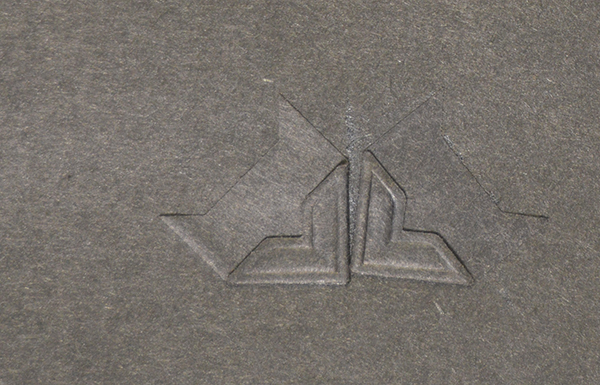 An archivist, or anyone concerned with preserving the photos found in an old album, has to decide whether it is better to remove the photos from the original pages (easier when they are held in paper corners like these) and preserve them, along with the related information, in a safer environment, or try and keep them ‘in situ’, as it were. 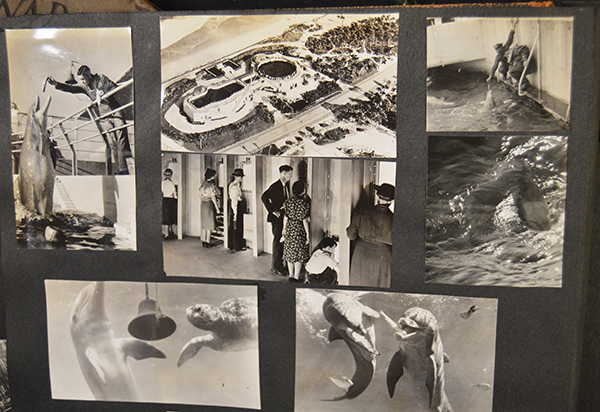 Sometimes the choice is more or less made for you, for example when photos are glued directly to the album page. Yes there are chemicals and techniques that might release pictures, but that brings in other issues, especially time and money.  It is not practical for a small organization to process and store hundreds of donated photos and albums a year. Therein is an important lesson for anyone who might have a collection of photos or albums at home. What is going to happen to them when ‘eventually’ arrives?

Cull. Select pictures that really tell a story and represent a key moment in time.

Identify. Write out the pertinent information, who, what, when, where, about a photo worth saving.

Store. Put the picture in an archival safe sleeve, box or album with the relevant information.

Designate. Pick out a person or, if appropriate, an institution that will welcome the collection. On the one hand you might be surprised at how few relatives actually want the family photos. On the other hand, you might be delighted to discover the one who does.

Another option can be dubbed “disperse.” It is not considered archival, but scanning and digitizing photos and their attendant information and then sending copies to different family members and storing them with some of the on line cloud storage systems can’t hurt. They are only as accessible as your computer and the programs needed to read the files. Who knows how likely that is a hundred years from now. 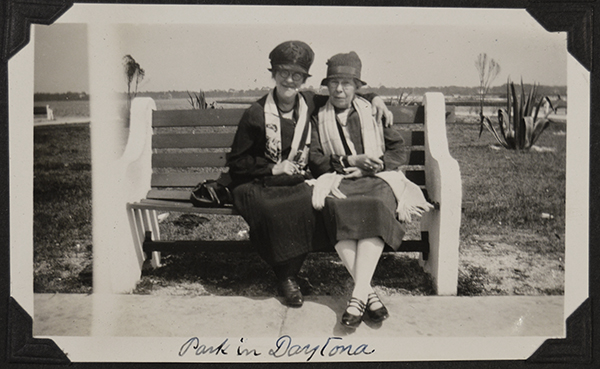 But could this couple on a park bench a century or so ago have predicted their delightful human moment would be seen on a thing called ‘the internet’ because someone had cared enough to carefully put it in a photo album, save it and protect it until it ended up, almost at random, under a camera at the Library of Florida History?