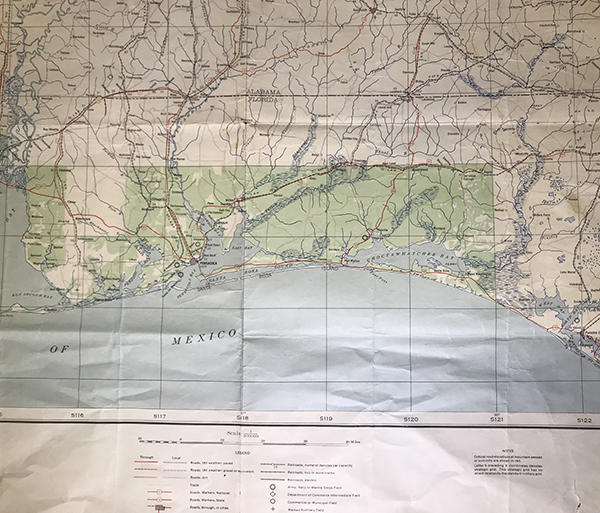 Even as Americans debated a possible role in the conflict now known as World War II, the U.S. military was considering the ‘what if.’  One step in 1940 was to generate this map, now in the collection of the Library of Florida History, detailing the terrain, roads and railroads of the Gulf Coast where Florida meets Alabama. The feared invasion never came, of course, and the area around Pensacola is considered the home of naval aviation training to this day. 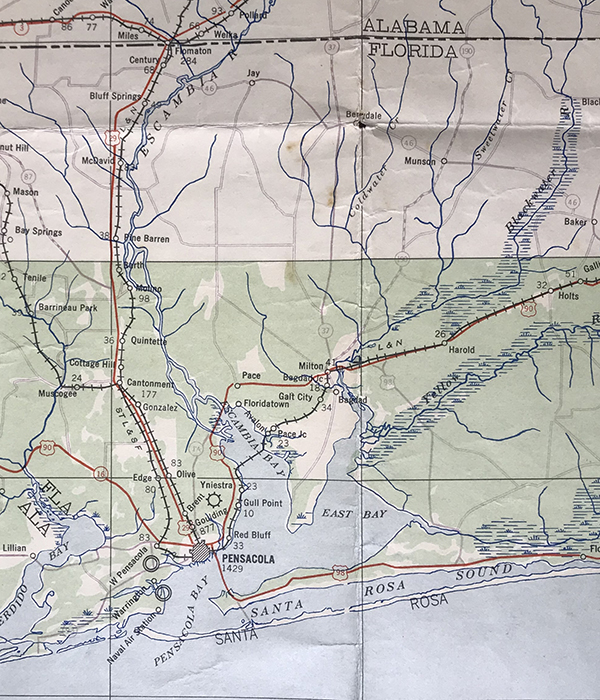 This map does offer us a pre-war close-up look at one of Florida’s lesser-known but historically interesting counties, Santa Rosa (https://www.santarosa.fl.gov/ ), just east of Escambia County and Pensacola at the western end of Florida.

Santa Rosa extends from the Alabama-Florida border on the north to the Gulf and is bounded on the west by the Escambia River and on the east by a line between Harold and Holts on this map. It is centered on Milton, the county seat, where the Blackwater River meets the East Branch of Pensacola Bay.

The branches of the Blackwater, seen extending into northern Santa Rosa are a link to the past. The largest industries in the area, even in colonial times, were logging and turpentine extraction in the seemingly endless pine forests that once covered the entire region. Those rivers were key to getting needed supplies in and product out. The little towns visible there, Munson, Berrydale and Jay, which might serve as poster children for the term ‘middle of nowhere’, all owe their existence to the pine forest and the lumber industry.

Even as the southern part of the county succumbed to a different kind of invasion, the tourists and retirees who settled there after the war, these remote towns still retain a hint of genuine old Florida.

The occasional flyover of jets out of NAS Pensacola or Eglin AFB to the east may remind you times have changed, but the miles of new growth trees in the Blackwater River State Park will serve as a reminder of what once was (https://www.fdacs.gov/Divisions-Offices/Florida-Forest-Service/Our-Forests/State-Forests/Blackwater-River-State-Forest).