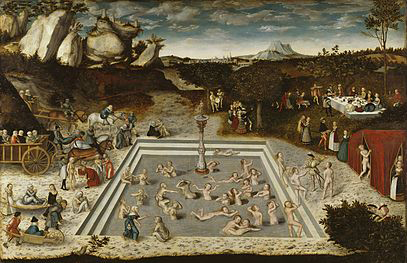 Where but Florida would you set a movie about rejuvenation? Our history practically mandates it. The set for the 1985 science-fiction comedy-drama Cocoon is practically story-boarded in this 1546 painting by German artist Lucas Cranach the Elder, right around the time the Fountain of Youth was being irrevocably intertwined with the history and culture of La Florida.

The idea of a fountain, or spring, or pond or pool or any water source you can imagine that restores life and vitality to anyone who touches, drinks, bathes or otherwise cavorts in it goes back at least to the 5th century BCE writings of Herodotus, the Greek who virtually invented the field of study we call History. He apparently also invented the concept that just because a story is old does not make it true. 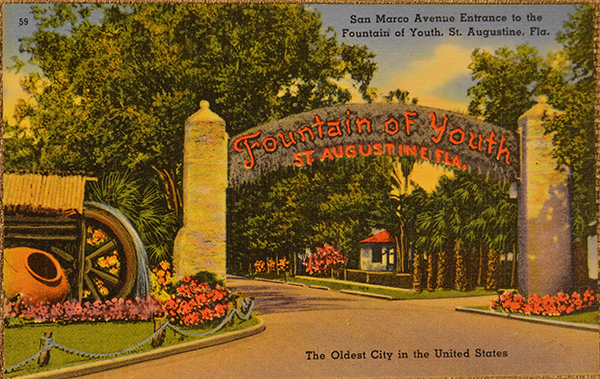 However, old is good enough if you are a marketing manager wanting to attract tourists to your client city in Florida in the early and mid-20th Century; especially if your client is the ‘oldest’ city in America. 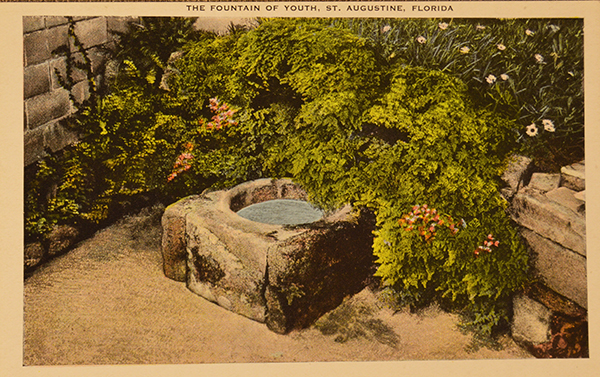 No fountain? No problem. Fortunately, any reasonably competent set designer can make a convincingly ‘old’ fountain by shaping and shading some locally mined coquiana rock. Once it was built, it was a matter of getting the tourists to come see it. Everyone knows Juan Ponce de Leon was looking for the Fountain of Youth a long time ago, right? 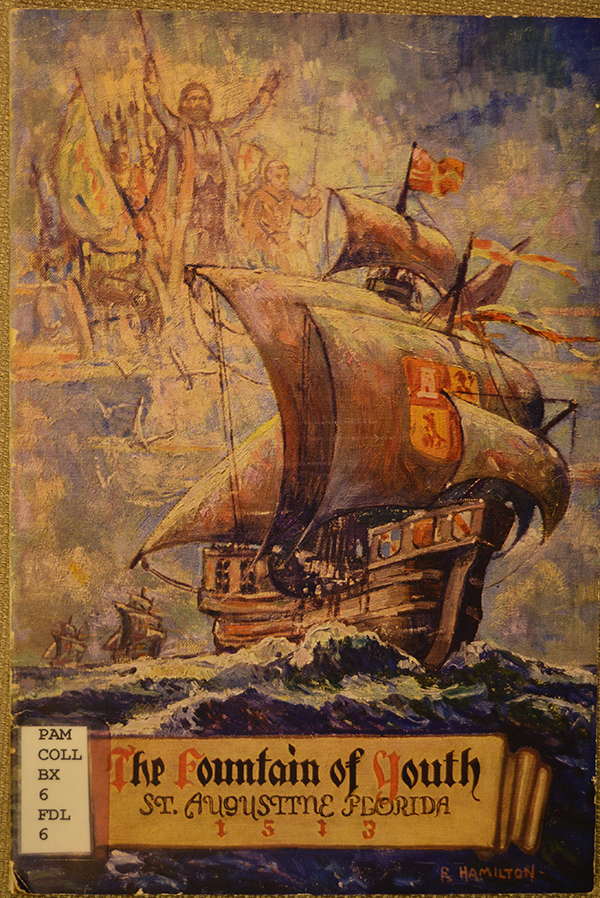 So, by 1927 this booklet was being distributed nationwide to promote St. Augustine, basically conflating Ponce’s 1513 trip to Florida in search of gold, silver and slaves with a later effort to establish a colony on Florida’s southwest coast (an effort that actually proved the death of de Leon from an arrow wound) and a much later story about a search for a fountain (or spring, etc.) with magical powers.

Did the Spanish explorers really believe in such a miraculous font? Well, they believed the natives’ stories about cities of gold, man-eating reptiles in the rivers and a white god who had visited and promised to return, so why not? Some of the tales had proved true. 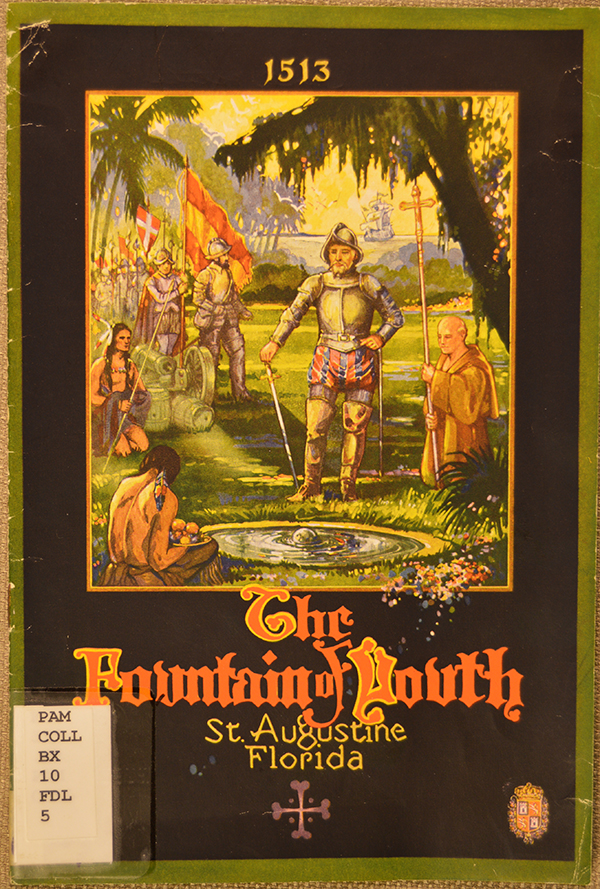 A marketing booklet published in 1933 basically doubled down on the connection between de Leon and the search for the age-reversing spring. The cover art leaves open the question of why Ponce is still an old man standing by the F of Y, or, indeed, why he was not still around giving tours in the park. 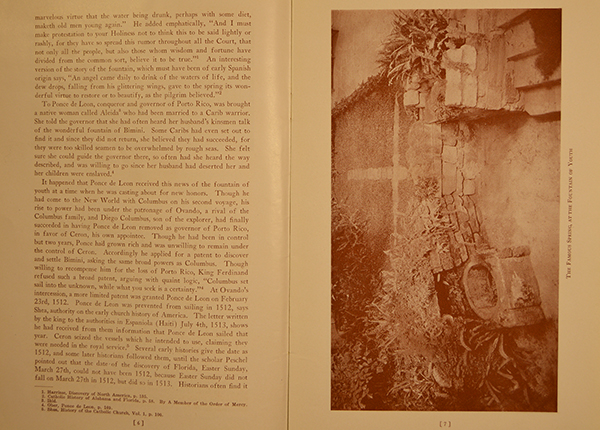 But the inside copy, written by no less a personage than Florida historian and author Carita Doggett Davis, 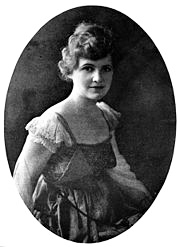 who would direct the Federal Writers’ Project, purported to be a well researched analysis, complete with foot notes, of the early source material linking de Leon with the belief in and search for the coveted waterway.

But then, in 1935, along came T. Frederick Davis and his article in the Florida Historical Society Quarterly. 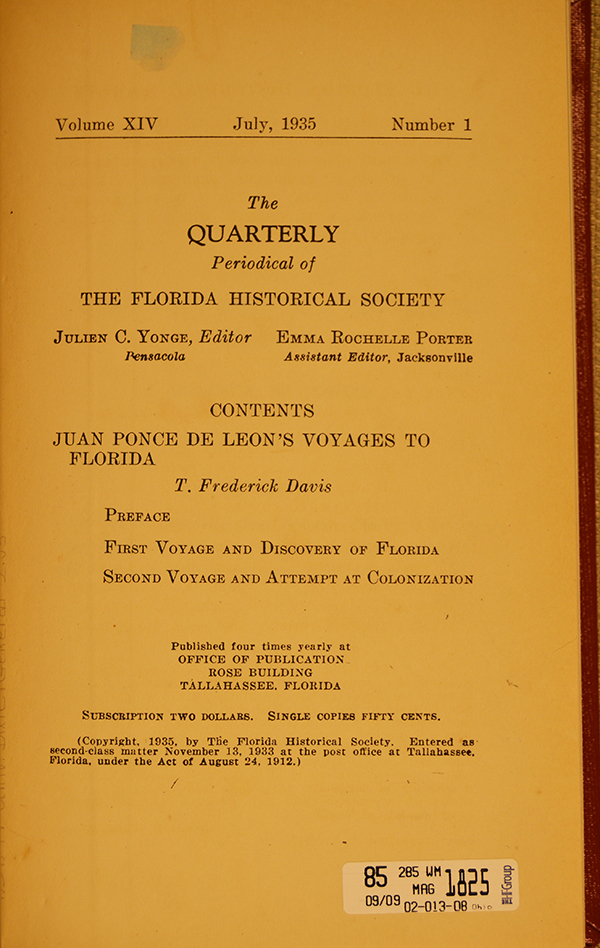 In this extensively researched, no nonsense example of scholarly objectivity (if we do say so ourselves) Davis begins to peel back the myth to uncover its origins.

Cutting to the chase: About ten years after de Leon’s death, a political rival wrote a story depicting de Leon as a crazy old man running around la Florida looking for a magical pond to restore his youth.

Note, this is about 70 years before crazy old Don Quixote would go out hunting wind mills.

Just about the time the world’s first novel was taking shape in Miguel Cervantes’ brain, Spanish historian and chronicler Antonio de Herrera was writing about de Leon’s expeditions. He picked up the Fountain of Youth narrative and, perhaps eternally, linked de Leon with the search for the mythical pond.

As for the park, it is still with us (https://www.fountainofyouthflorida.com/ ). But you will notice, in much smaller font than the words “Fountain of Youth”, the words “Archaeological Park.” 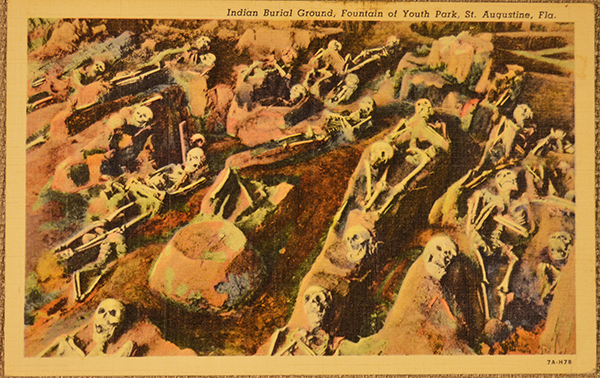 Turns out the site does have a solid history, not only of a village of the Timucua people who long inhabited the area, but of remains of the earliest Spanish settlement.

As for the final proof that the stories of Juan Ponce de Leon, the Fountain of Youth and the City of St. Augustine are inevitably entwined in Florida’s history, all these artifacts are found in the Library of Florida History in Cocoa, so it must be true.