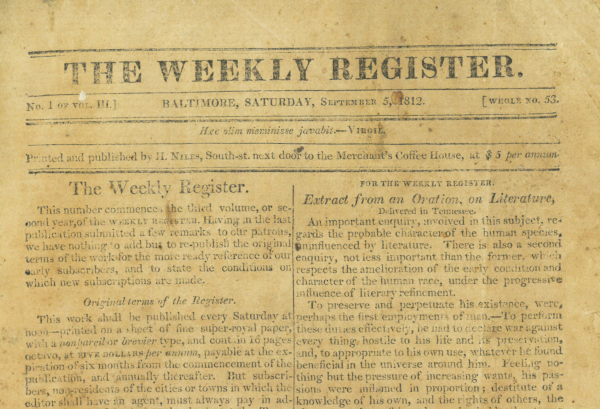 The phrase “first rough draft of history” defining journalism is widely attributed to the Washington Post. Variations on it were used throughout the early 20th Century and it was popularized by publisher Phil Graham (1915 – 1963) mid-century. 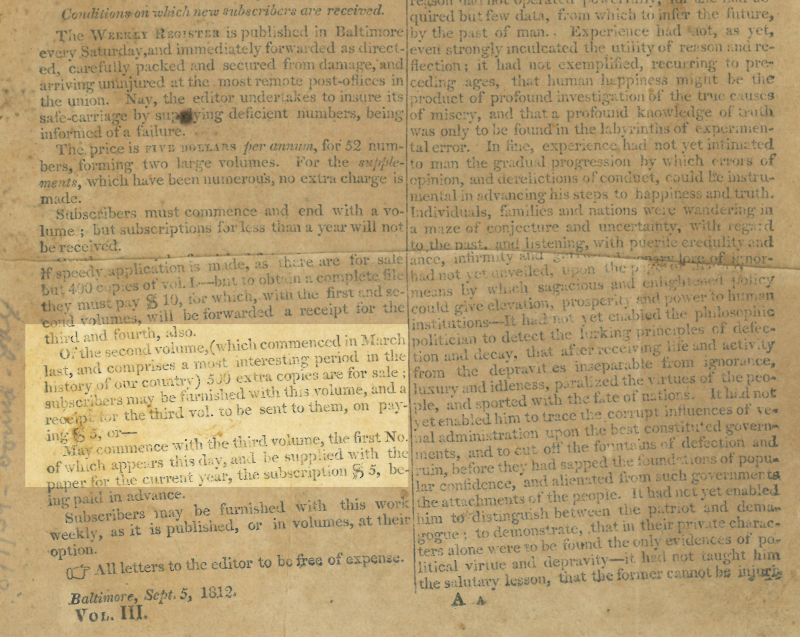 But the relationship was noted long ago. One example is a passage from a September 1812 edition of The Weekly Register, one of the most widely read weeklies of its day (circulation about 4 thousand, annual subscription $5.00, about $94 in current money).  An 1812-13 compilation of the paper can be found in the archives of the Library of Florida History.

The paper gathered news from all over the young country, which, you likely noted, did not include Florida. Yet.  These were interesting times, all right, the beginning of America’s “manifest destiny” to expand beyond its current   borders, not only west but also north, into Canada and, if Georgia slave owners had their way, south into Florida.

The ill-fated efforts to liberate the Canadians from English rule have made it into most history courses. Not so the “Patriot’s Rebellion” in the then Spanish ruled colonies of East and West Florida.

Basically, the Georgia slave owners wanted to end the sanctuary runaway slaves found in the Spanish territory. The runaways sometimes started their own settlements and at other times formed alliances (captive or otherwise) with the Seminole Indians who had also migrated or fled to the area to get away from the American influx onto traditionally tribal lands.

The Georgians figured they could ride into Florida (since Spain was allied with England in the part of the Napoleonic Wars American’s call “the War of 1812”), incite a rebellion among the European settlers there who would naturally side with their white liberators, and at the end of the war, Florida would be American territory.

So they did. The Georgia Militia went into north-east Florida, took Amelia Island and attacked several smaller Spanish outposts along the northern border. In what was then West Florida troops took Mobile and approached Pensacola. In the east they set siege to St. Augustine, one of the largest Spanish centers. 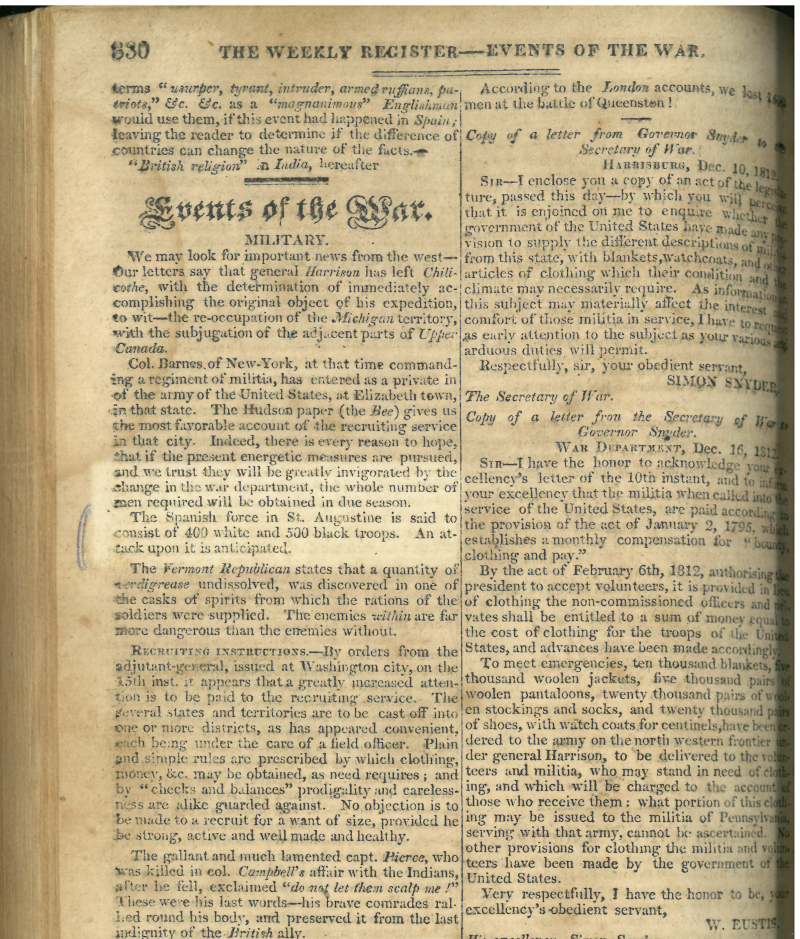 By modern newspaper standards, layout was not The Weekly Register’s long suit. For the most part information was typeset in columns in the order it was received, but sprinkled in with concerns over recruiting and the quality of rations, we can find references to the Florida campaign. 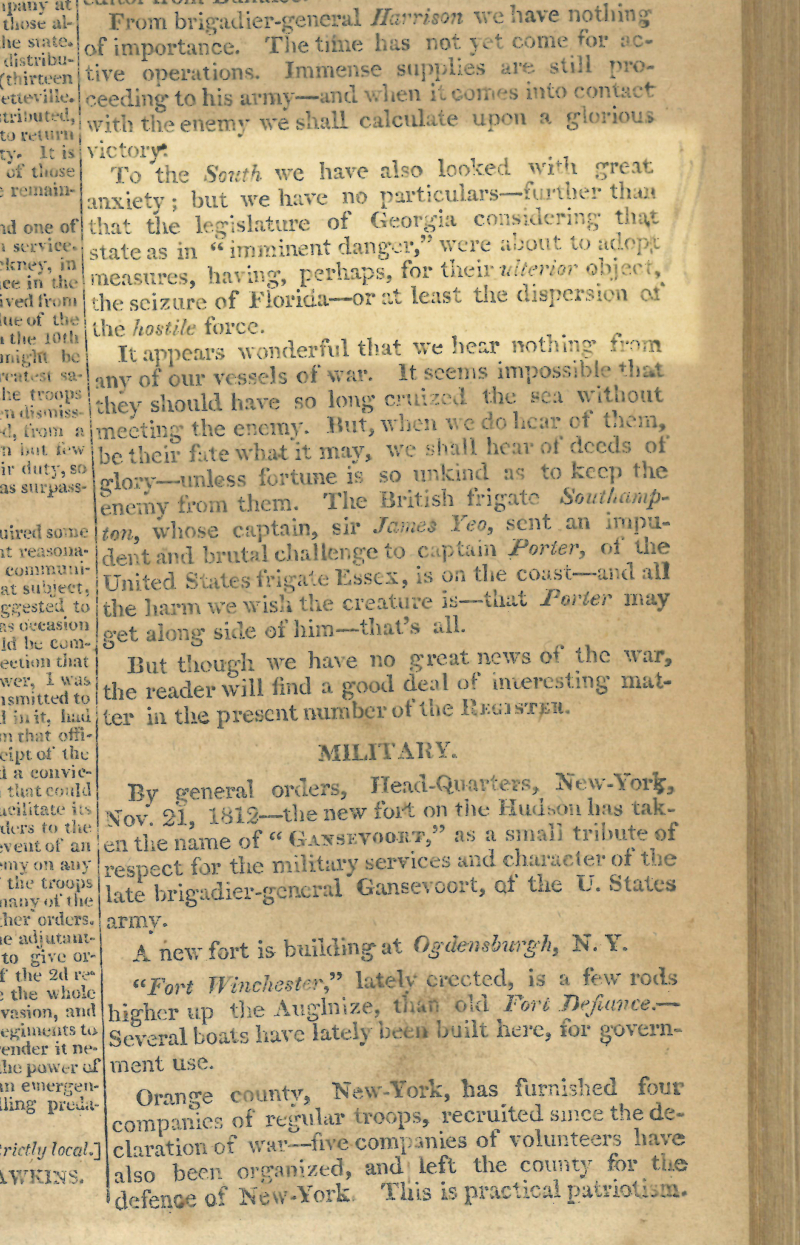 The concepts of headlines, photos, white space and story placement were all in the future. But then as now, you could count on a journalist, with some “quotation marks” and font changes, to call out politicians’ hidden agendas.

For the record, the Americans attacked St. Augustine in March, 1813. They were repulsed. The rebellion never materialized and the effort to establish a Republic of East Florida failed. But, this was the beginning of the end of centuries of Spanish rule, with a few years out for the “British Interlude”, of Florida.