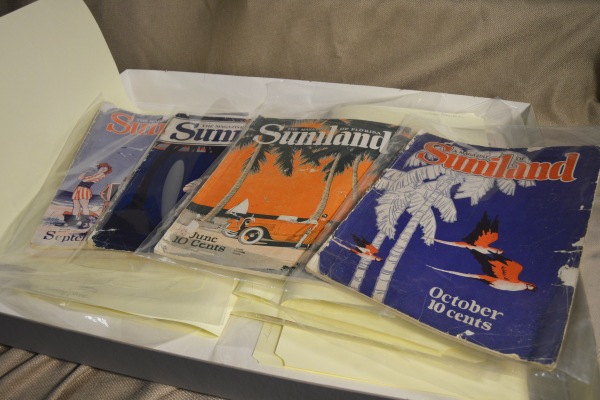 What would it take to entice a Michigan farmer or a struggling New England store owner to invest everything he had in a piece of Florida land where he could grow his own wealth?  Some of the leading figures of what is now known as the early 1920’s Florida Land Boom thought a bright, modern and lively magazine extolling the state’s story would do the trick, and they were ready to invest time and money to make it happen.

Volume one, Number one of “Suniland”, sporting Art Deco palm trees and tropical birds against the blue Florida sky, came out in October, 1924.  The first issue (at right in the picture) and a dozen or so of the following issues are preserved in the collection of the Library of Florida History in Cocoa.

The publication was widely distributed throughout the northern states. Priced at 10 cents, its target demo was the hard –working-but -still -wanting –more, lower middle class American who perhaps spent time in Florida training in the army for WWI and liked the climate, or who might visit, by car or train, and be lured away from Yankee winters.

The magazine may have been published by land speculators and the ads might have been from real estate agents and business interests, but it told the story of the real Florida. Honest. It said so right on the introductory page of the first issue:

There were articles on the history of the state, and about the quality of life in the major cities: 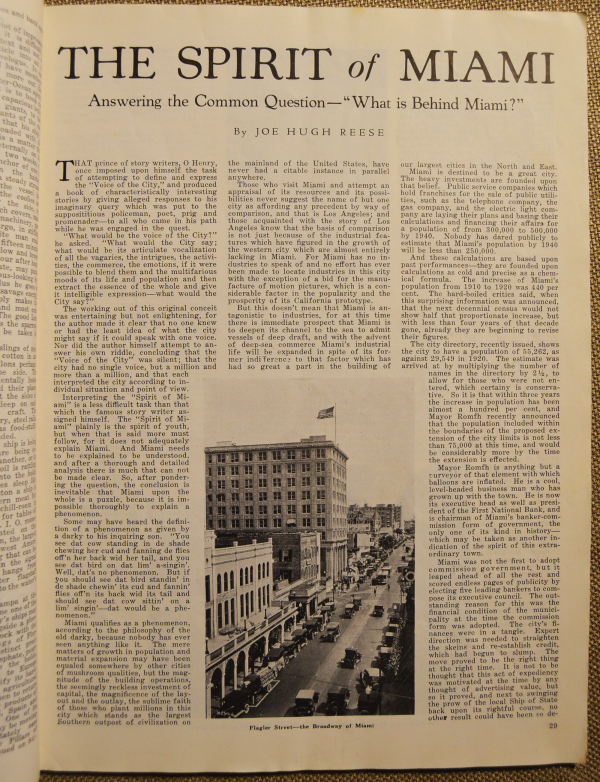 In an era when some Americans might have never seen an airplane, let alone have been up in one, the publishers used that emerging technology, too: 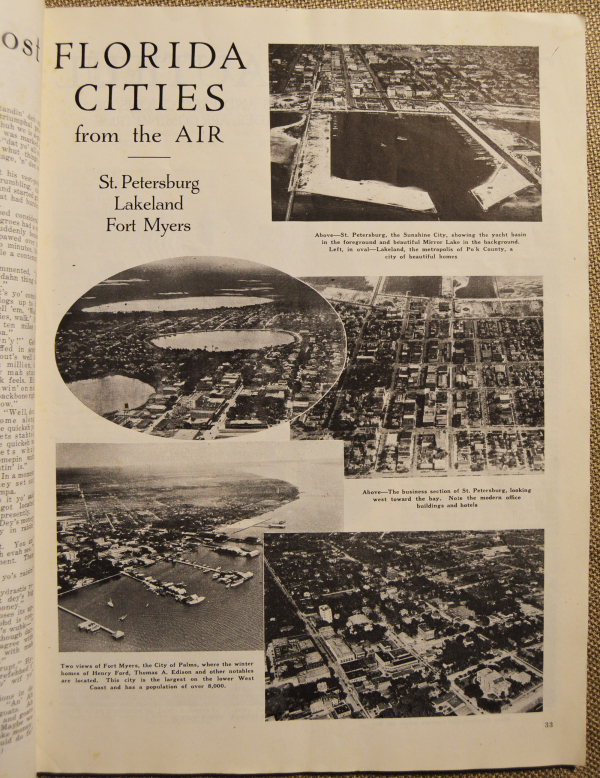 Not all the stories were about business and commerce. Take for example the tale of one James E. Monroe, make that “Major” James E. Monroe, who claimed to be 109 years old, a Florida resident since 1862, who slept “under the stars” in a hammock strung between two cypress trees behind his simple house south of Jacksonville and who swam every morning in the St. John’s River: 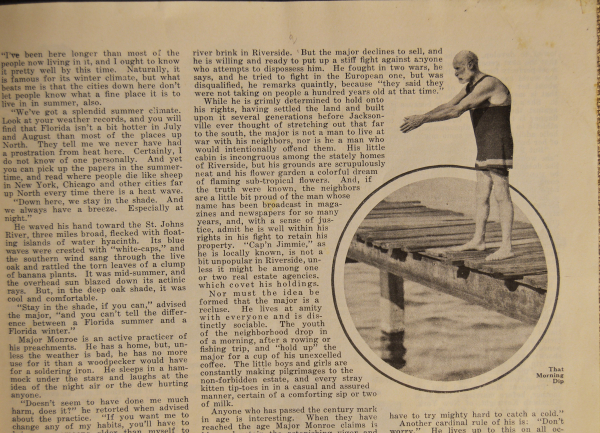 Those mosquitoes, those alligators... rumors. Honest.

Of course, you, too, could have a piece of the good life and even have neighbors like Jim: 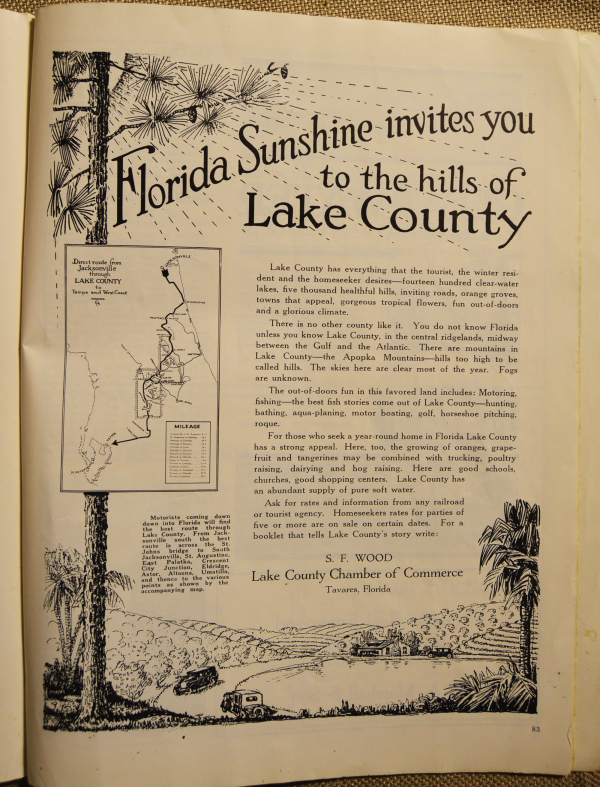 Just ask the Chamber of Commerce.

Say agriculture was not your thing; you had bigger ideas, a sure thing certain to make you rich. Well, where better to make your dreams come alive and find like –minded businessmen who also liked warm weather: 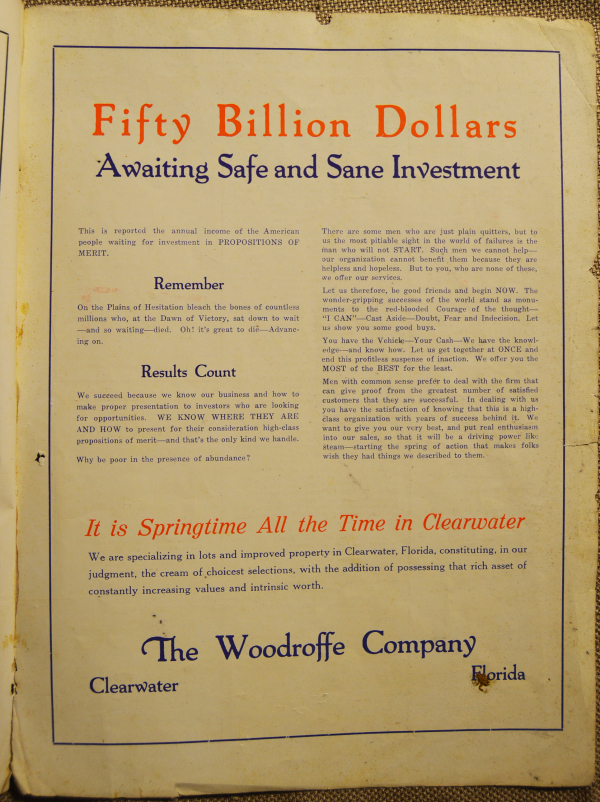 This was the 1920s. Everyone was getting rich investing in business, chasing opportunities, selling land and developing new communities.  What could go wrong?

“Suniland”s run ended in March, 1926, right around the time the land boom crashed. You can only sell so many people dream lots that are remote, inaccessible, under water or not really yours to sell. Word gets around, no matter how slick your magazine.

And, it was a quality magazine. Multi-color printing was rare in the early ‘20s. The Art Deco style is remarkable. The stories offer fascinating insights into the history of Florida and an intriguing time in the state’s development, a time that foreshadowed the national economic trends.

It is fitting perhaps that these magazines are classified as ‘ephemera’, created for a specific use and not intended to last.