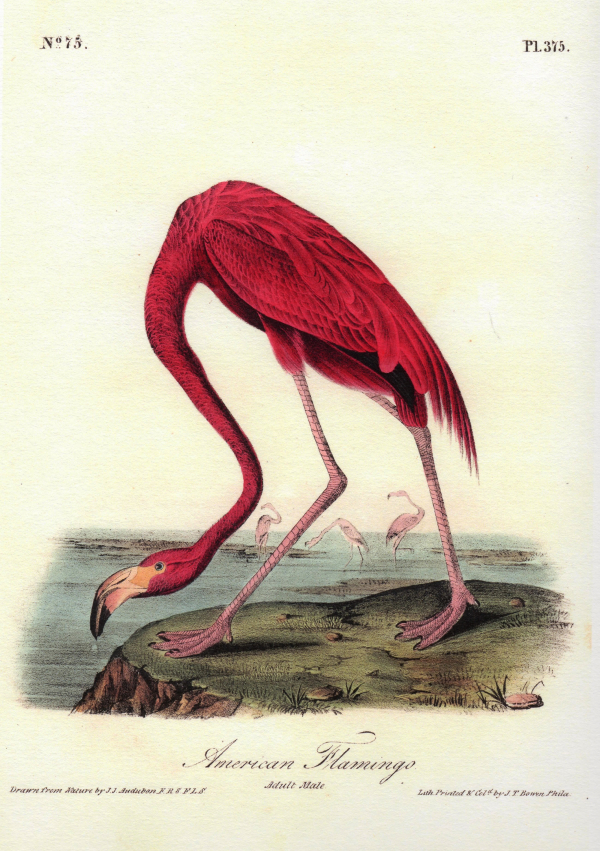 The instantly recognizable Audubon drawings of birds of North America beautifully evoke a time when unspoiled nature dominated the land. But, then as now, the critical, interrelated and fragile biospheres were threatened by human activities. 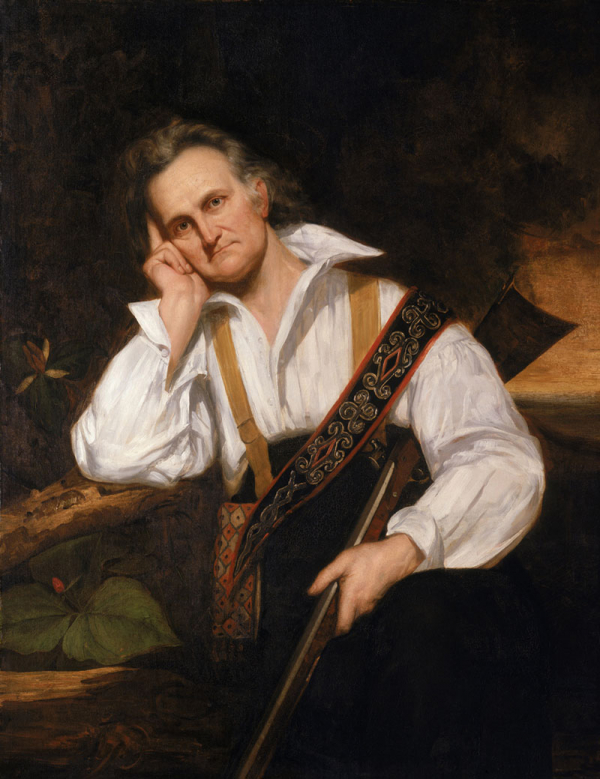 The ornithologist, naturalist and painter, John James Audubon, (born Jean Rabin, April 26, 1785 – January 27, 1851) made several trips to Florida in the 1830s as he documented all types of birds for his color plate book entitled The Birds of America. 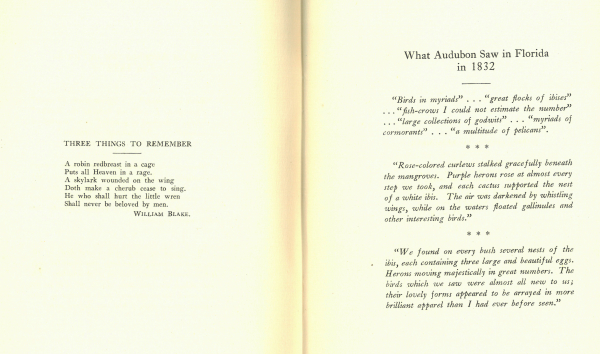 His words, displayed in a booklet in the collection of the Library of Florida History, drives home the extent of bird flocks found in the various habitats of early Florida. To early settlers, those flocks must have seemed endless and indestructible. They weren’t.

In the 1890s the damage, mainly from over hunting of the bird population for sport and for the collection of feathers for the fashion industry, was obvious. Local chapters of a foundation begun in Massachusetts in 1896 began to spring up around the nation. 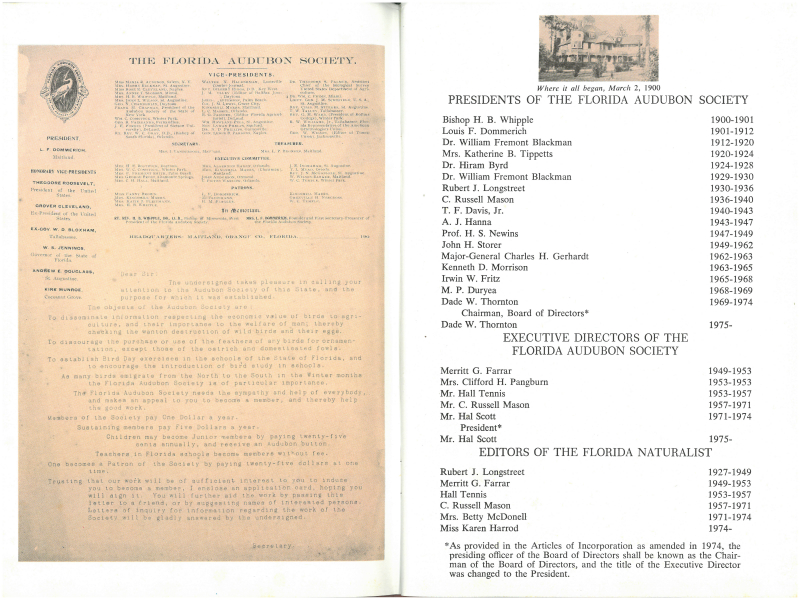 In March, 1900, a group of concerned individuals met in a private home in Maitland, Orange County to launch the Florida Audubon Society. 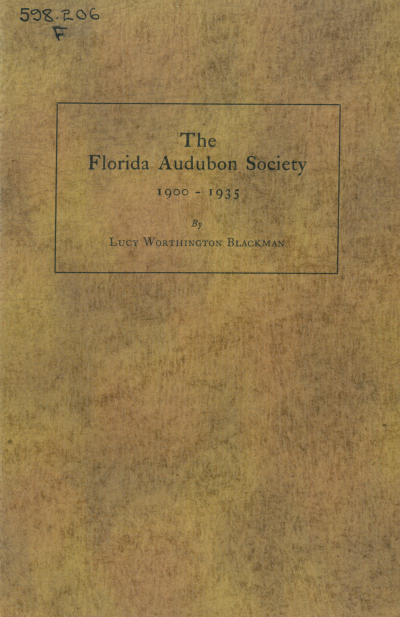 Its history, up until 1935 anyway, is recounted in the booklet found in the Library’s collection.

It might be tempting to think of a club of bird lovers as a gathering of tea-sipping elders standing around on a manicured lawn discussing their personal sightings lists. You would be wrong. This book does include some minutes of actual meetings, but it offers several glimpses ‘beneath the hood’ of the bird advocacy effort. 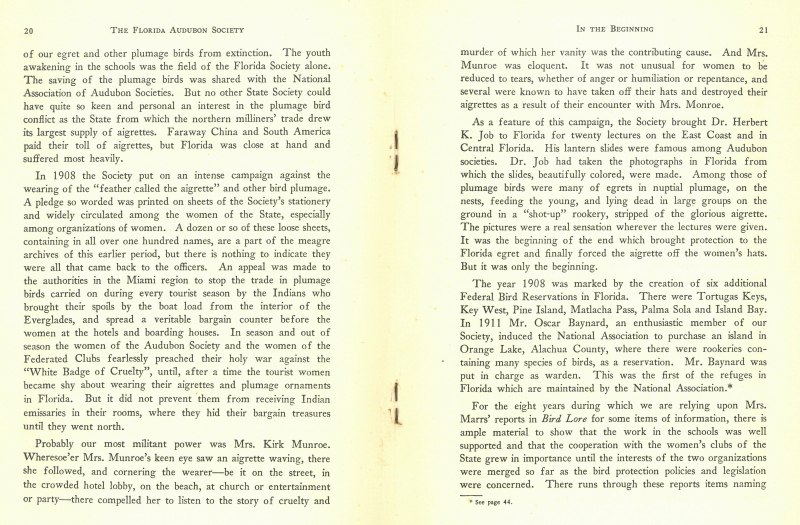 On page 20 we find the delightful story of Mrs. Kirk Munroe who would challenge women she spotted wearing feathered hats. 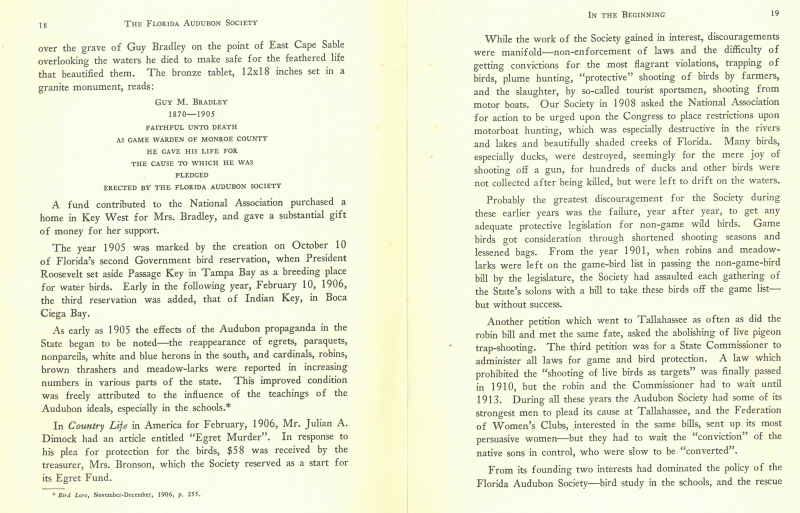 On page 18 we find a copy of the memorial to Monroe County Game Warden Guy Bradley who was killed in the line of duty.  On the following page we see, then as now, environmental activists often find it difficult to inspire legislative action.

Now, as then, concerned people still fight the fight. Florida has the highest concentration of local chapters in the country. Dozens around the state focus on their individual environments, ranging from the Everglades, to the beaches, to the woodlands and prairies. The main focus has shifted, from over hunting to habitat loss, but the concern is the same, human disregard for the importance of ‘our feathered friends.’