The Florida Everglades were a mystery to map makers as late as the 1890’s. In 1898 Hugh L. Willoughby, the wealthy son of a banker, and who had never held a real job, set out in early January to explore the remote southern part of Florida. While it was fashionable for such young men to be adventurers and hunters, he was fascinated by the sciences, inventions (eventually he won dozens of patents) and the Everglades. He was determined to succeed in his venture where others had failed. In part by learning from the earlier explorers’ mistakes, he did succeed, and he published his accounts in late 1898 calling his book “Across the Everglades”. 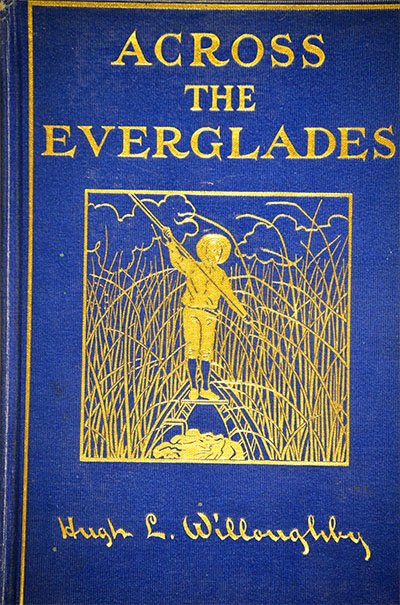 The first edition copy at the Historical Society includes about 50 photographs, 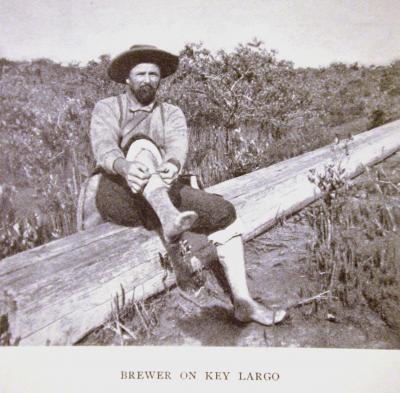 many of them posed,  in addition to the delightful narrative.

Breaking with the tradition of the earlier explorers, Willoughby began his trip on the west side of Florida, in the Ten Thousand Island area and headed east, knowing if he just kept going he would eventually run into Henry Flagler’s railroad. (photo: Map shopped 0377)The data he collected helped map makers fill in those uncharted spaces.

Willoughby took advantage of the technology of his day. In addition to the camera he equipped his canoe (photo: canoe sextant)  with a cyclometer, a paddle wheel attached to the side of the canoe to measure the distance traveled, and a sextant for nightly position readings. He also collected hundreds of plant and animal specimens, (photo: translations) picked up some of the local Seminole language and made observations about the hydrology and structure of the Everglades that convinced him the ecosystem was not simply a swamp, but was, in fact, a flowing river.